When will weed be legal in Virginia?

Virginia’s Governor Ralph Northam amended the bill today (March 31st)  that would fast track the state’s recreational marijuana legislation to July 1st of this year– a three year acceleration from the originally planned legalization date of 2024. The bill is expected to pass the both houses with significant support and votes from two Republicans when they reconvene on April 7th.

The amended bill includes an increased budget for public health messaging around marijuana and a provision that would allow a household to grow up to four plants starting July 1st.  Additionally, Northam’s amendment proposes legislation that could accelerate the expungement and sealing of charges related to marijuana crimes.

68%  of Virginians support the marijuana legislation and many are eager to become part of the 15 other states and D.C. that legalized cannabis, but the delay stems from the need to create regulations and licenses for cannabis companies.

There is already an existing license for Virginia hemp farmers; the two industries may be part of the same stalk but they are different branches. The combination of the CBD & marijuana industries leaves a lot up in the air for the Virginia cannabis industry as a whole.

While possession of cannabis was decriminalized in July of 2020, Virginia was the first state to pass medical marijuana laws in 1979. The provisions made in the state’s criminal code only prevented the prosecution of those who were charged with possession but held a valid medical marijuana license. But, since marijuana is not an FDA-regulated substance it legally cannot be prescribed by physicians. 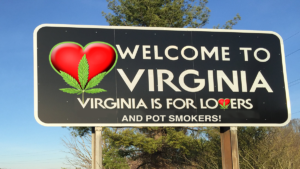 It wasn’t until over 30 years later, in 2017 that the Virginia General Assembly permitted patients diagnosed with intractable epilepsy to access CBD and THC, while allowing limited cannabis cultivation and dispensation. Then next year, Governor Ralph Northam expanded access to medical marijuana by allowing physicians to recommend the plant to any patient who could benefit.

When Virginia decriminalized marijuana, the state made simple possession a civil penalty fine of no more than $25. However, the process of legalizing recreational marijuana isn’t as simple as decriminalization due to the need to establish cannabis cultivation and distribution regulations, approve business licenses, & the expungement and release of criminals with previous non-violent related marijuana charges that need to be organized and implemented.

The main push for faster legislation came from the ACLU of Virginia, Marijuana Justice and New Virginia Majority & 20+ other groups, who wrote a letter demanding that Northam legalize possession up to one ounce and to reduce the charge of over an ounce to 5 pounds to a civil penalty. Their demands stem from a statistic that found 52% of people arrested in Virginia for illegal possession since the decriminalization of last summer have been black while only 20% of Virginians are African American, according to the census.

A major concern of legalizing possession before a regulated industry is established, is it could promote exponential growth of a deregulated industry, ultimately resulting in an unbalanced market for legitimate licensed business. Ideally, both for pro-cannabis organizations and legislators the legalization of possession and regulations are on the same date.

There is also the question of the severity of marijuana penalties in comparison to alcohol and other legal vices and how it could increase the number of DUI crashes. Additionally, some Republicans are concerned about how legalization will affect children due to it commonly being labelled as a “gateway drug”.

The biggest misconception between cannabis/THC and hemp/CBD is that there won’t be a need for hemp once cannabis is legal. This is far from true as there are many people looking strictly for CBD products that do not contain trace amounts of THC.

While THC will become legal within the state, it currently remains federally illegal so interstate and international transportation is only legally possible for hemp derived CBD products(<0.3% THC). And even with CBD aside, the fiber/hurd sectors of the industrial hemp industry are just being established with proper supply chain infrastructure within the US, as stakeholders gear up for the domestic market to flourish. 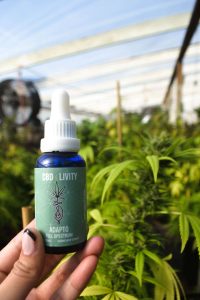 We predict that in Virginia specifically, CBD companies will try to reposition themselves to cater to both, the legal hemp (CBD) market as well as the legal recreational cannabis (THC) market. Hemp growers will expand into growing Cannabis, CBD manufacturers will expand into offering THC products, and perhaps some CBD retailers will transition into full-fledged dispensaries, offering an array of cannabis products. However, all of this will largely depend on state licensing and regulations.

The easiest transition between the hemp market and the cannabis market in Virginia will be for cultivators. Those who grow hemp (specifically for CBD and other cannabinoids) currently won’t need to change their growing process at all in order to incorporate Cannabis into the mix. The only thing that will be different is the genetics they are working with. It will also be very easy for any distributors who currently connect hemp suppliers to retailers to expand into Cannabis, as long as they are awarded a license to do so.

There will also be a big opportunity for ancillary businesses, or “non-touching” cannabis businesses, that may not necessarily work directly with cannabis, but provide goods or services to support the industry (for example – hydroponics & home grow stores, ATM services, real estate services, media outlets & conventions, etc.)

Only a certain number of licenses will be awarded for cultivators (450 total), processors/manufacturers (60 total), dispensaries (400 total), and wholesalers (25 total). Supposedly, the awarded licensees will be drawn from a pool of qualifying applications. The current legislation also allows individual counties within the state to opt-out of the Adult Use program, meaning that if you live in a county that has opted out of the program, you will not be allowed to participate in any way (except for personal consumption).

Those qualifying companies whose ownership consists of at least 66% of individuals who have previously been directly affected by cannabis criminalization, live in an economically distressed area, or have attended an accredited black university will receive social equity benefits including low-interest loans and potential grants to help pay for application and start-up costs, guidance from the Cannabis Control Authority, and will have favor over other qualifying applications.

Currently, the legislation states that vertical integration is allowed for companies who pay a $1 million fee to the state and implement an “equity and inclusion” plan.

The biggest obstacle for small CBD companies to overcome with the up and coming rec cannabis program will be the increasing competition of other CBD and cannabis businesses (as cannabis cultivators and processors can ALSO produce Cannabis-derived CBD products), as well as the fees associated with cannabis licensing and legal advice.

The recreational cannabis industry in the state can benefit the CBD industry as it provides more consumer education about the benefits of each cannabinoid (intoxicating and non-intoxicating), therefore letting consumers know that they have options.

Many cannabis dispensaries see the value in hemp-derived CBD as some consumers are not looking to get high, but rather looking to just take the edge off or provide relief without the extra sensation. CBD is the solution, and dispensaries offer CBD products to fill that gap in the recreational market.

As of right now, Virginia is not limiting hemp operations from getting involved in the cannabis industry (as some other state’s do), so it gives agricultural producers an opportunity to flourish.